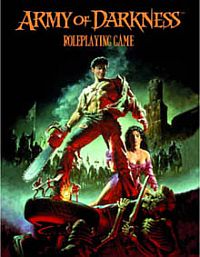 Sprawdź cenę
Opis wydawcy
Alright, you primitive screwheads, listen up!
You’re in a strange land, with strange people, and you’re not thinking too clearly. The natives are suspicious, the leaders hostile, the priests cryptic, and no one’s bathed in months. Advanced tech is a hole in the ground filled with sewage. The basic food groups are roasted haunch, moldy bread, and watered-down wine.
Getting home ain’t going to happen anytime soon. First you need to find some stupid book, then recite some stupid phrase, then bring the stupid book back to the stupid castle. Heck, there’s probably a bunch of other stupid stuff you have to do. Just nobody’s told you about that yet.
Inside this swank beauty, we’ll show you how to put the dead in deadite. Here, you will find:
Utwory powiązane
Gry (12)