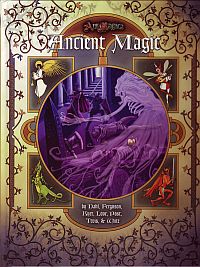 Sprawdź cenę
Opis wydawcy
Legends tell of the mighty wizards of the past, sorcerers with powers that dwarf those of the magi of the Order of Hermes. Hyperboreans whose spells lasted a generation, necromancers of Canaan who could summon any of the dead, rune magic that brushed aside Magic Resistance like cobwebs; all these stories circulate in the Covenants of the Order. Other forms of magic are so ancient that even the legends have become rare. The Seekers are those magi of the Order who search for these secrets, aiming for the glory of being the one to bring the power to modern magi.
This book contains descriptions of nine forms of ancient magic, and rules for integrating their secrets into Hermetic theory. From the frozen north to the westernmost edge of the world, from humankind′s earliest homes to grand temples of the classical world, the quest can lead your characters anywhere in Mythic Europe, and even beyond. How far will they go for knowledge?
Utwory powiązane
Gry (28)