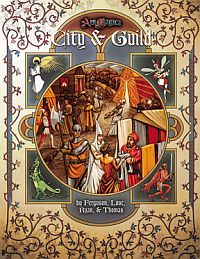 Sprawdź cenę
Opis wydawcy
In the thirteenth century towns and cities are growing all over Mythic Europe. Covenants that were once in remote forests find themselves within sight of city walls, and regions that were once cut off from the world are now visited by traders from distant parts. For many covenants, cities are a great opportunity; craftsmen and merchants can provide anything that the covenant needs, and buy its surplus. Some covenants are even established within towns, or as small towns.
This supplement for Ars Magica Fifth Edition provides background on the facts of life in the towns of medieval Europe, and rules for craftsmen and traders. Clever magi could become the greatest merchant princes of Europe, or gain renown as suppliers of the most valuable tapestries. Less clever magi could find themselves manipulated by existing merchant princes, or tricked into buying shoddy goods. With an emphasis on stories rather than accountancy, this book opens a new stage for your Ars Magica saga.
Utwory powiązane
Gry (28)