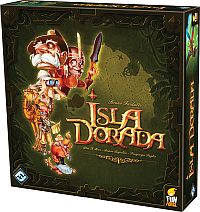 Sprawdź cenę
Opis wydawcy
Guide your expedition through hazardous terrain and hostile territory, exploring the wonders of Isla Dorada while you compete to find the most treasure among your fellow explorers. Designed by the creative team of Bruno Faidutti, Alan R. Moon, Andrea Angiolino, and Piergiorgio Paglia, „Isla Dorada” is a board game of strategic bidding and exploration for 3-6 players.
In „Isla Dorada”, players join together to form an expedition, navigating through a mysterious and treasure-ridden island. However, since each player is competing to be the one explorer to find the most treasure, they each have their own treasure maps and their own secret motivations. To move the expedition, players bid cards that allow them to move the expedition through certain terrain. Whoever wins the bid gets to move the expedition and potentially find their hidden treasure.
Utwory powiązane
Gry (17)