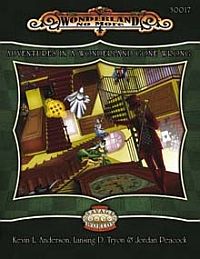 Sprawdź cenę
Opis wydawcy
In 1865, Lewis Carroll introduced the world to the delightful nonsense of „Alice’s Adventures in Wonderland”, and followed up with „Through the Looking Glass, and What Alice Found There” in 1871. These tales present us with a world of whimsy and absurdity, and maybe just the tiniest hint of danger and adventure.
But what if there really was an Alice who visited Wonderland and what if it didn’t vanish as soon as she left? What if Wonderland’s childlike charm tarnished just a bit with the years, and it warped under the weight of its own nonsense? Maybe it’s all just a dream-or a nightmare-but it’s all very real for anyone trapped within.
„Wonderland No More” provides a setting for adventures within a realm of fantasy and the unexpected, a madcap ride that bounces between humor and horror. Here, when the Queen of Hearts cries, „Off with their heads!” it usually happens!
Take on the roles of wooden Chessmen, two-dimensional Cards, talking Animals, mobile Plants, Tweedle, or even the occasional Human. Knights quest for blessed artifacts of Alice, Little Girls master the deadly Queen’s Croquet, Haberdashers have a few tricks under their caps, and Gourmancers create magical foods and drinks (helpfully labeled „Eat Me” or „Drink Me” for those who can’t figure it out on their own).
Lighthearted or sinister, it’s all what you make of it in Wonderland – because we’re all mad here.
Contained in this book:
Utwory powiązane
Gry (32)