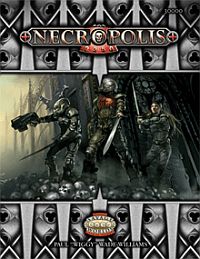 Sprawdź cenę
Opis wydawcy
„Necropolis 2350” is a sci-fi horror setting set in the 24th century. In these dark days, mankind, divided into two main camps, stands on the brink of extinction.
The focus of the game is on Knights of the fictional Third Reformation Church, who are locked in desperate battle against „undead” invaders known as the Rephaim. While the heroes of humanity use advanced weapons and vehicles and can call upon the power of faith, the twisted Rephaim are masters of necromancy and wield vile technology created from living tissue.
„Necropolis 2350” contains:
Teksty w Esensji
Gry – Recenzje