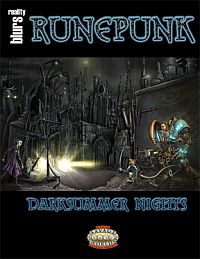 Sprawdź cenę
Opis wydawcy
You think you know every nook and cranny of ScatterPoint?
Think again, jobber. This book takes it to the street as you get an in-depth slice of life of ScatterPoint first hand and learn what it really takes to survive in the big city. Be careful you don′t get hurt.
Welcome to DarkSummer
Known as Three Rails by the locals, DarkSummer is one of the older and most dangerous boroughs in all of GreyMesa. Remember, we warned you.
Contents at a Glance:
Not enough for you? We didn′t think so either, so we present you with Broken Dreams, a complete and complex adventure wrought with mystery and intrigue that ties together many of the people and places found in DarkSummer.
Gear up, you lazy grubs. You′ve got work to do. They don′t call you jobbers for nothing!
Utwory powiązane
Gry (32)