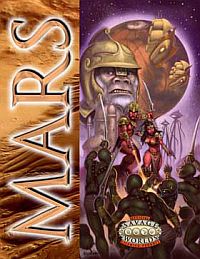 Sprawdź cenę
Opis wydawcy
Welcome to Mars!
Not Mars as it is - airless, most likely lifeless, with only the faintest hints of what might have once been a damp, if not necessarily lush and living, world billions of years in the past. No, this is Mars as it should be and as it was once imagined to be - an ancient, dying, but not yet dead world, a world where a vast canal network reaches from pole to pole, bringing water and life to vast and fantastic cities. A Mars where albino apes run a vast empire in the last surviving jungle, a world where warrior tribes of Green Martians raid the outlying cities of the canal dwellers, a world where, in places dark and quiet and forgotten beneath the surface, ancient and terrible intellects plan dark and dire deeds.
It is a Mars of sky-corsairs, of duels with blade and blaster, of vile plots, fantastic inventions, daring rescues, arena battles, and spectacular stunts. It is a Mars where ancient cities can be discovered and their lost treasures plundered, a Mars where a trek across the dry sea bottoms can yield amazing discoveries, where terrible monsters roam the rocky wastes.
It is the Mars of pulp fiction and Saturday morning serials.
It is now yours.
Adamant Entertainment′s sword-and-planet campaign setting is now available for Savage Worlds! From character creation, to creatures, to tips on the planetary romance genre, MARS: Savage Worlds Edition features everything you need to get started telling savage tales of adventure beneath the moons of Mars.
Utwory powiązane
Gry (32)