The Day After Ragnarok

Kenneth Hite
‹The Day After Ragnarok› 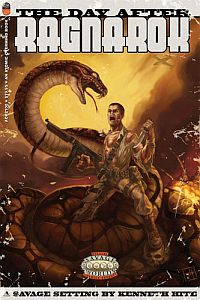 Sprawdź cenę
Opis wydawcy
Know, O Prince, that between the years when the Serpent fell and the oceans drank America and the gleaming cities, and the rise of the Sons of Space, there was an Age undreamed of, when nations guttered low and flared brilliant across the poisoned world like dying stars - California and Texas each claiming the flag of the West, France torn asunder and facing the desert, harsh Mexico, slumbering Brazil, Argentina where the seeds of Thule lay waiting, ancient lands of Persia and Arabia and Iraq between two empires, the coldly clutching Soviet Union whispering behind its Wall of Serpent, Japan whose warriors wore steel and silk and khaki. But the proudest kingdom of the world was Australia, the last green and pleasant land, ringed around by its dominions and bulwarked by the sea.
Welcome to the world at the end of the world. The skies are shrouded with burning, oily smoke, the Earth groans under a poisoned corpse, and the only way out may be deeper into the belly of the beast. This is a world about a flavor and a feel as much as it is about extrapolation. That said, this world has something of an edge to it - it′s a world nearly killed by the death of wonder, although far from all the wonders are dead. Put the "grim" back in "grime" and see the world outside the smeared Perspex windscreen.
See it smolder. See if you can save it.
Utwory powiązane
Gry (32)