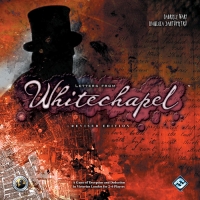 Sprawdź cenę
Opis wydawcy
Get ready to enter the poor and dreary Whitechapel district in London 1888 – the scene of the mysterious Jack the Ripper murders – with its crowded and smelly alleys, hawkers, shouting merchants, dirty children covered in rags who run through the crowd and beg for money, and prostitutes – called „the wretched” – on every street corner.
The board game „Letters from Whitechapel”, which plays in 90-150 minutes, takes the players right there. One player plays Jack the Ripper, and his goal is to take five victims before being caught. The other players are police detectives who must cooperate to catch Jack the Ripper before the end of the game. The game board represents the Whitechapel area at the time of Jack the Ripper and is marked with 199 numbered circles linked together by dotted lines. During play, Jack the Ripper, the Policemen, and the Wretched are moved along the dotted lines that represent Whitechapel’s streets. Jack the Ripper moves stealthily between circular numbered circles, while policemen move on their patrols between crossings, and the Wretched wander alone between the circular numbered circles.
Utwory powiązane
Gry