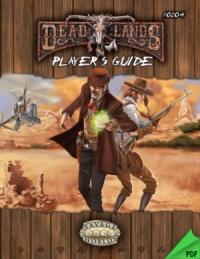 Sprawdź cenę
Opis wydawcy
Strap on your six-gun and saddle up, partner. There’s Hell to pay and the currency is hot lead!
The year is 1879, but the history is not our own. The guns of the Civil War are silent in a tense cease-fire. California is shattered by the Great Quake Quake of ’68, a superfuel called ghost rock revealed in the new channels and cliff faces. Powerful Rail Barons strive to complete a transcontinental railroad, and the Great Rail Wars exact a bloody toll in the Union, the Confederacy, the Sioux Nation, the Mormon state of Deseret, and the Independent Commonwealth of California.
The Tombstone Epitaph has always been filled with lurid tales of daring desperadoes and deadly drifters, but lately the West’s most-read tabloid claims there’s something more sinister stalking the fronteir’s lonely plains: monsters! Fortunately, where there are monsters, there are heroes. Squinte-eyed gunfighters, card-chucking hexsligners, savage braves, and righteous padres have all answered the call. And if they fight hard enough, they might just discover the identity of the mysterious Reckoners some say are behind it all.
„The Player’s Guide” is the core rules book for player of Deadlands Reloaded. It includes new rules for shootouts at high noon, new Edges, Hindrances, and powers, and everything thing a cowpoke needs to begin his journey into the Weird West.
Utwory powiązane
Gry (23)