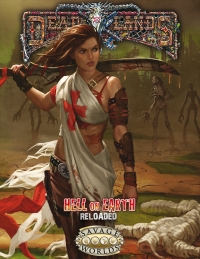 Sprawdź cenę
Opis wydawcy
There Came a Reckoning...
The year is 2097, but the future is not our own.
The Last War ended in a rain of ghost rock bombs that killed billions and turned the world into a Deadland. And then the Reckoners came--the Four Horsemen of the Apocalypse--bringing death and ruin to billions more and seeding the world with horrific monsters beyond imagining.
Then came a harbinger--the strangest savior of all--a former servant of the Reckoners turned traitor, Dr. Darius Hellstromme. With the aid of a band of survivors called the Iron Alliance, the world′s most renowned "mad scientist" trapped the Reckoners and transported them off the planet and far, far away.
Now the world sits in ruin. Monsters stalk the wastelands. Ghost rock storms swirl around blasted cities. Possessed cyborgs run rampant over the High Plains. Strange wormlings tunnel beneath the irradiated soil. And a few lone bastions of civilization hold out against the horrors left behind.
Hell on Earth: Reloaded is the sequel to the Weird Western, Deadlands Reloaded, and the newest version of the original Hell on Earth game line. Inside you′ll find new rules for survival in the Wasted West, including new Arcane Backgrounds such as doomsayers, junkers, templars, and toxic shamans. You′ll also see what the state of the world is after the Reckoners and the all-new challengs that remain for the world′s survivors.
Hell on Earth Reloaded is not a complete game. It requires the Savage Worlds rules to play. It does not require knowledge of the Deadlands Reloaded setting.
Utwory powiązane
Gry (43)