Saga of the Frost Giants 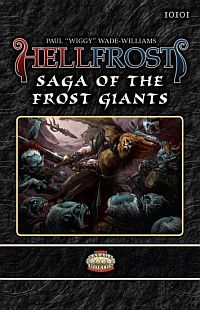 Sprawdź cenę
Opis wydawcy
Welcome to „Saga of the Frost Giants"!
„Shadow of Darkness": Joining a caravan as guards is a way to earn good money, though it is not without its risks. Having signed up as guards, the heroes are about to take part in a journey from the lands around Hellfrost Keep, to the distant Saxa steads of the Icebarrier Mountains. The caravan must weather many goblin attacks but it soon becomes clear the goblins are not acting alone. Something more powerful is behind their attacks, something with grander plans than a few raids.
„Siege of Watchgap Fort": With night falling, the strong walls of the Fort offer sanctuary. Or so you thought, for no sooner have the heroes settled down when an alarm is raised -- a goblin army is besieging Watchgap Fort! Will you answer the call to arms, or will your courage fail you when it is most needed?
„The Heart of Winter": Summer draws near, and the village of Torton is preparing for its annual festival in honor of Thunor. It is a time of celebration and happiness, and the heroes are welcome guests. But hidden away from the warmth, a creature of terrible cold plots and plans the destruction of the world. Through the awesome power of the winter god, Thrym, the servant of evil plans to bring about the Fimbulvintr. Should it succeed, the Hearthlands will be punged into perpetual winter. The cry goes out for heroes! Are the characters ready to face their greatest threat? Is their destiny to destroy the Heart of Winter or die trying?
„The Frost Giant’s Hold": Three times the heroes have interfered in the plans of Jarl Hrimwulf the Grim, and three times the heroes have vanquished the jarl’s minions. But now the Norns have decreed the final act must play out between the mighty frost giant and the mortal adventurers. At stake is nothing less that the fate of the Hearthlands. After facing death on the shores of White Lake battle must be taken to The Frost Giant’s Hold!
Hellfrost „Saga of the Frost Giants” is designed to be used with the Hellfrost Player’s Guide, Bestiary & Gazetteer using the award winning Savage Worlds RPG.
Utwory powiązane
Gry (32)