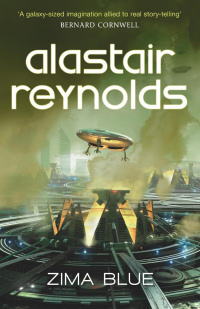 Sprawdź cenę
Alastair Reynolds
Opis wydawcy
Reynolds’ pursuit of truth is not limited to wide-angle star smashing – not that stars don’t get pulverised when one character is gifted (or cursed) with an awful weapon by the legendary Merlin. Reynolds’ protagonists find themselves in situations of betrayal, whether by a loved one’s accidental death, as in ‘Signal to Noise’, or by a trusted wartime authority, in ‘Spirey and the Queen’. His fertile imagination can resurrect Elton John on Mars in ‘Understanding Space and Time’ or make prophets of the human condition out of pool-cleaning robots in the title story.
But overall, the stories in ‘Zima Blue‘ represent a more optimistic take on humanity’s future, a view that says there may be wars, there may be catastrophes and cosmic errors, but something human will still survive.
A fabulous collection spanning the galaxies and career of SF superstar Alastair Reynolds.
Teksty w Esensji
Książki – Recenzje